Conservatives raised objections to what they dubbed a Liberal 'power grab' 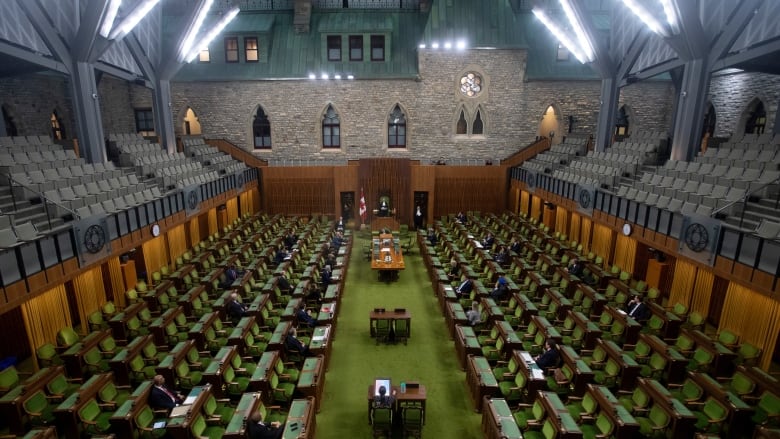 A small group of MPs returned to Ottawa to deal with the emergency aid package. The MPs who were in the House of Commons to tackle the bill Tuesday were seated at least two metres apart. (Adrian Wyld/The Canadian Press)
6625
comments
The government and opposition parties in Parliament have passed an aid package bill worth $107 billion to help Canadians struggling during the COVID-19 pandemic — legislation that will boost access to employment insurance and other programs that will flow money to workers and businesses in need.
The House of Commons passed the legislation early Wednesday morning after a late night of tense negotiations to limit the Liberal government's ability to spend more money without parliamentary approval. The legislation passed the Senate without any amendments and the bill received royal assent from Governor General Julie Payette Wednesday afternoon.
The Senate heard from Finance Minister Bill Morneau Wednesday, who painted a grim picture of the state of the Canadian economy. Morneau told senators it was essential for Parliament to quickly approve a plan to get money to Canadians in need at a time when hundreds of thousands of workers are facing unemployment.
Morneau said Canada is suffering an "enormous" number of job losses right now, but the government hopes and expects those losses will be temporary. Morneau was taking questions from senators who wanted details on how the new Canada Emergency Response Benefit (CERB) would actually work.
Under the legislation, Morneau said, workers would have access to as much as $2,000 a month for four months.
Watch: Morneau questioned by Senators about the details of the COVID-19 Bill 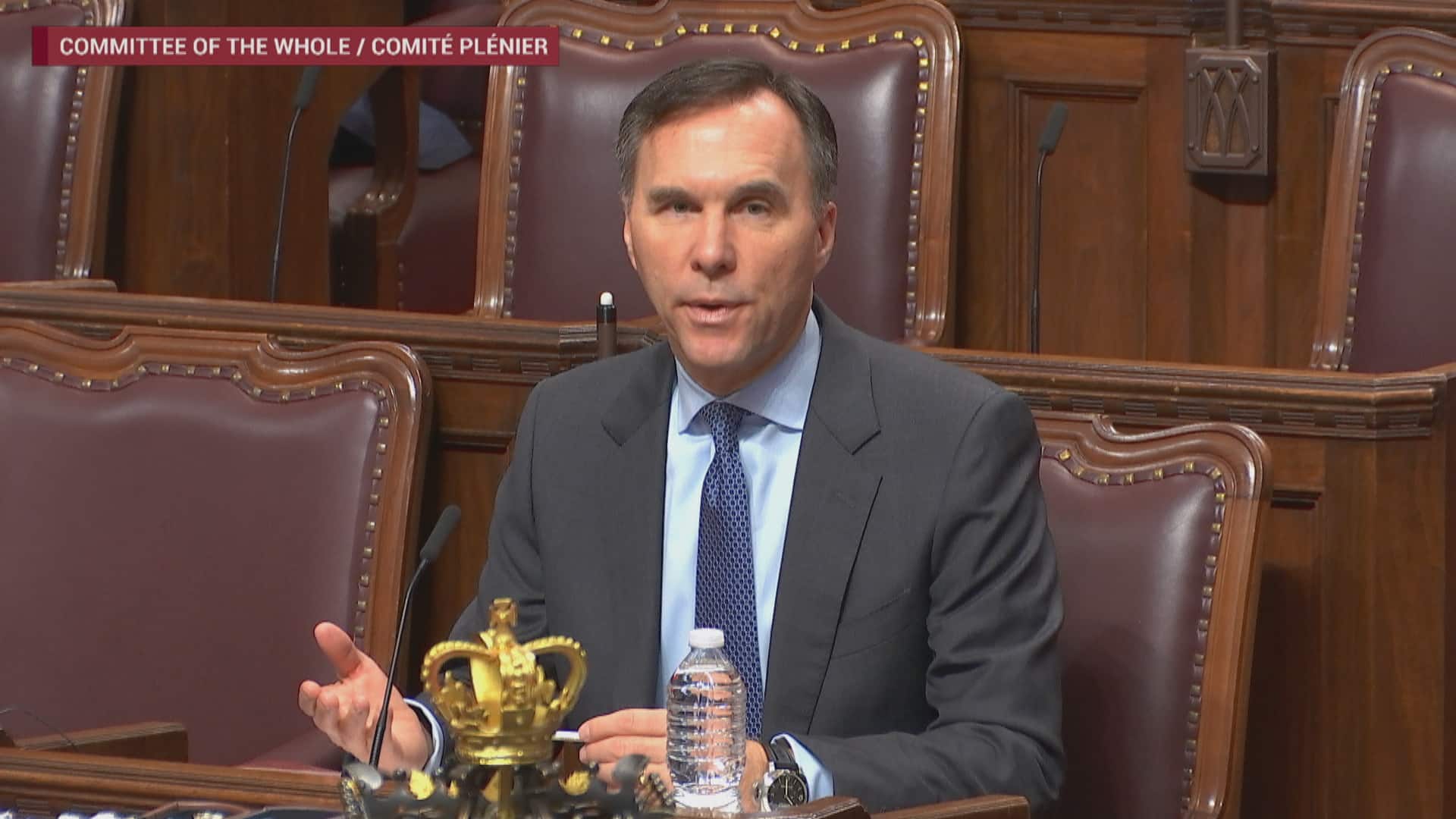 
Finance Minister Bill Morneau appeared before the Senate on Wednesday morning before the COVID-19 Bill received Royal Assent. 1:01:09
Canadian workers over the age of 15 who have earned more than $5,000 in the last 12 months but are now earning no income because of the COVID-19 pandemic would qualify. Workers, including freelancers, will have access to the CERB even if they do not have access to the current employment insurance (EI) program.
Morneau, responding to a question from a senator, said the government needs to ensure that employment will be there for people when the pandemic is over. The current situation, he said, is "absolutely unprecedented."
As initially pitched, the bill was worth about $82 billion — but Morneau said Wednesday the price tag has increased sharply to $107 billion because the forthcoming emergency response benefit is more generous and will be available to more people.
He said Ottawa has now budgeted for $52 billion in direct support payments and $55 billion in tax deferrals.
'I have no interest in scoring political points'
The bill's passage in the Senate was all but guaranteed after the Opposition Conservatives in the Commons secured key concessions from the government on some parts of the bill the Tories described as a blatant "power grab."
At least three parts of the bill were removed or amended — notably, the sections that granted the government unlimited tax-and-spend powers until the end of 2021. As written, the bill now grants the government unlimited spending power until June 2020. The legislation also includes "sunset clauses," so that parts of the bill come to an end if they're not reauthorized by Parliament through legislation.
"Few of us could have imagined being where we are today, but here we are. We are in this together, and together – with God's help – we will get through it," Conservative Senate Leader Don Plett said in a speech to the chamber.
WATCH | Trudeau speaks Tuesday outside Rideau Cottage:


Prime Minister Justin Trudeau announces that the Canada Emergency Response Benefit will provide $2,000 per month for the next four months to workers losing income as a result of COVID-19. 1:30
"I have no interest in scoring political points today. We will be supporting this legislation. But I would be remiss if I did not put my concerns on the public record."
Plett said that while he's a "staunch fiscal conservative," he fears that the aid package simply doesn't go far enough, since it includes many one-time measures that might not provide adequate financial support to people in need.
Plett said government must be accountable to Parliament through regular reports to the House of Commons health and finance committees to help "identify any abuses."
House sits late into the night
An emergency sitting of the Commons was suspended Tuesday moments after it began as Conservatives balked at provisions that would give the government sweeping new powers.
Conservative Leader Andrew Scheer said early in the day that his party would support emergency efforts to get money to Canadians struggling with the COVID-19 crisis, but would oppose any attempts by the Liberal government to expand its power.
His warning came before a small group of 32 MPs gathered in the Commons to debate and vote on legislation to deliver $82 billion in financial aid and tax deferrals to individuals and businesses, as proposed last week by the government to deal with COVID-19 and its ensuing economic havoc.
They convened as scheduled. However, the sitting had only just begun when the House leader asked that it be suspended so that the government could continue negotiating details of the legislation with opposition parties.
"Canadians need support to get through this. Fast," Rodriguez tweeted shortly after the sitting was suspended.
Almost six hours later, Bloc Quebecois Leader Yves-Francois Blanchet angrily denounced the delay. If the government couldn't get consent needed to pass the legislation in one day, as hoped, Blanchet said the bill should be put through the normal, lengthy legislative process necessary to get the money flowing as quickly as possible.
He guaranteed Bloc support to approve the legislation.
In the end, the bill received all-party support, but it passed on division during second reading after Conservative MP Michael Chong voiced his opposition.
The proposed aid package from Ottawa includes:
At a Tuesday morning news conference, Scheer said the Conservatives had no issue with the relief package promised by Trudeau last week. But they wouldn't agree to give the government a blank cheque to spend and tax as it pleases for almost two years, as initially proposed in a draft of the bill.
"Any conversation about new government powers should not get in the way of passing this much-needed assistance," he said. "Canadians are counting on us."