CRA如何向数百万加拿大人提供紧急援助，环球邮报的报道：
It took 12 minutes for Silvano Tocchi to know for certain that the Canada Revenue Agency had succeeded in its three-week scramble to get emergency benefits into the hands of millions of desperate Canadians.

Thirty thousand applicants for the Canada Emergency Response Benefit flooded the CRA’s website in those 12 minutes, starting at 6 a.m. on April 6, the first wave in what has grown to 7.5 million payments to Canadians who have lost their income to the economic ravages of the fight against the new coronavirus.

On that early Monday morning two weeks ago, Mr. Tocchi, a director-general at the CRA, watched that surge carefully. He was well aware that the registration system had been built to handle as many as 400,000 applications an hour, but there was no way to know for sure how it would deal with such an unprecedented volume. And he knew that much more than just the CRA’s reputation was at stake; millions of Canadians were counting on the agency to get it right, to get badly needed emergency funds for groceries and rent into their bank accounts.

Mr. Tocchi said that need was never far from mind, particularly since the spouse of one of the senior developers on the project had been laid off and was among the millions waiting for the emergency benefit. “It made it really real,” he said.

The first wave made it through in those 12 minutes without a hitch, the culmination of a three-week dash by the CRA to launch a program and payment mechanism – a task that would usually take a year or more of careful planning, and scores of meetings. To win that race, the CRA threw aside many of the typical strictures of the federal bureaucracy, including the extraordinary step of designing a benefits program before the enabling legislation had even been debated.

The dash began on March 12, when the federal Finance Department reached out to senior CRA officials, including assistant commissioner Frank Vermaeten, to find out if the agency would be able to deliver the (yet to be named) emergency benefit program. (The Employment Insurance system, administered by Employment and Social Development Canada, was not designed to handle the unprecedented volume that was expected.)

Mr. Vermaeten recalled being confident the CRA was up to the job, since it was already working on sending out additional GST and child benefit payments that the government had authorized as part of initial emergency aid.

But he was already thinking of how the CRA would need to shift its typical focus on process and precision. “We calculate things to the penny,” he said.

Not this time. The legislation that would underpin the program was still being drafted. Despite an initial assurance that the basic design would not change, it did, several times. The need for speed meant that the typical progression of policy from Parliament to legislation to regulation was turned upside down.

In a brainstorming session on March 21, Mr. Vermaeten and Mr. Tocchi recalled, it quickly became clear that the volume of applicants would run into the millions and would overwhelm any system the CRA could design. That realization was the moment that the idea of staggering applications by birth months came to be.

It was a topsy-turvy moment for the two CRA officials, as the agency floated that idea to the Prime Minister’s Office, and a few days later, watched Prime Minister Justin Trudeau explain it on live television. In the federal bureaucracy’s world, program design by civil servants is adapted to policy decisions by political leaders, not the other way around.

Another previously inconceivable step was allowing applicants to simply attest that they were eligible, without providing any supporting documentation. That approach was a major departure for the risk-averse civil service that, if asked to choose between a belt or suspenders, would pick both.

“We gave up the suspenders there," Mr. Tocchi said.

Kevin Quigley, scholarly director at the MacEachen Institute for Public Policy and Governance at Dalhousie University in Halifax, said civil servants typically try to balance efficiency, stability and accountability, with efficiency and speed usually losing out. In the case of the coronavirus crisis, he said, there was no choice but to abandon that habit. “This is lightning speed for them."

Even as the CRA scrambled to get the application process up and running, it was working with financial institutions on a massive push to sign up Canadians for electronic deposit, in order to avoid dumping a huge number of paper cheques into the postal system.

The CRA had been talking with banks for two years about ramping up direct deposits, but those discussions hadn’t gained any traction beyond a limited pilot project. The coronavirus crisis changed that; in just 48 hours, the banks had determined that it was possible to embark on a direct-deposit marketing blitz. “Within one week, they went and did this," Mr. Vermaeten said.

As of April 14, 22 private financial institutions had signed up 1.4 million Canadians for direct deposit.

For their part, the banks praised the CRA’s agility and its collaborative approach. “It seemed to almost happen overnight,” said John Ferren, senior vice-president of deposits at Canadian Imperial Bank of Commerce.

And government officials laid out the urgency of acting, said Ramesh Siromani, RBC’s senior vice-president of strategy and transformation, and payments modernization. “They got our attention saying it’s a crisis, impacting all Canadians."

At the CRA, the lessons of the CERB are being put to work as the agency lays the foundation for wage subsidies that businesses will start to apply for in coming weeks. Celebrations will have to wait. “We haven’t even had our glass of wine,” Mr. Tocchi jokes. How the CRA rolled out emergency aid to millions of Canadians

据说美国人只要上税就能获得每月一千多的紧急救济款，不管疫情期间有没有工作。跟加拿大的相比较，哪里更好呢？
Success is getting what you want；
Happiness is wanting what you get. 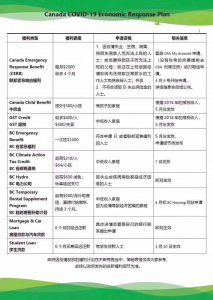