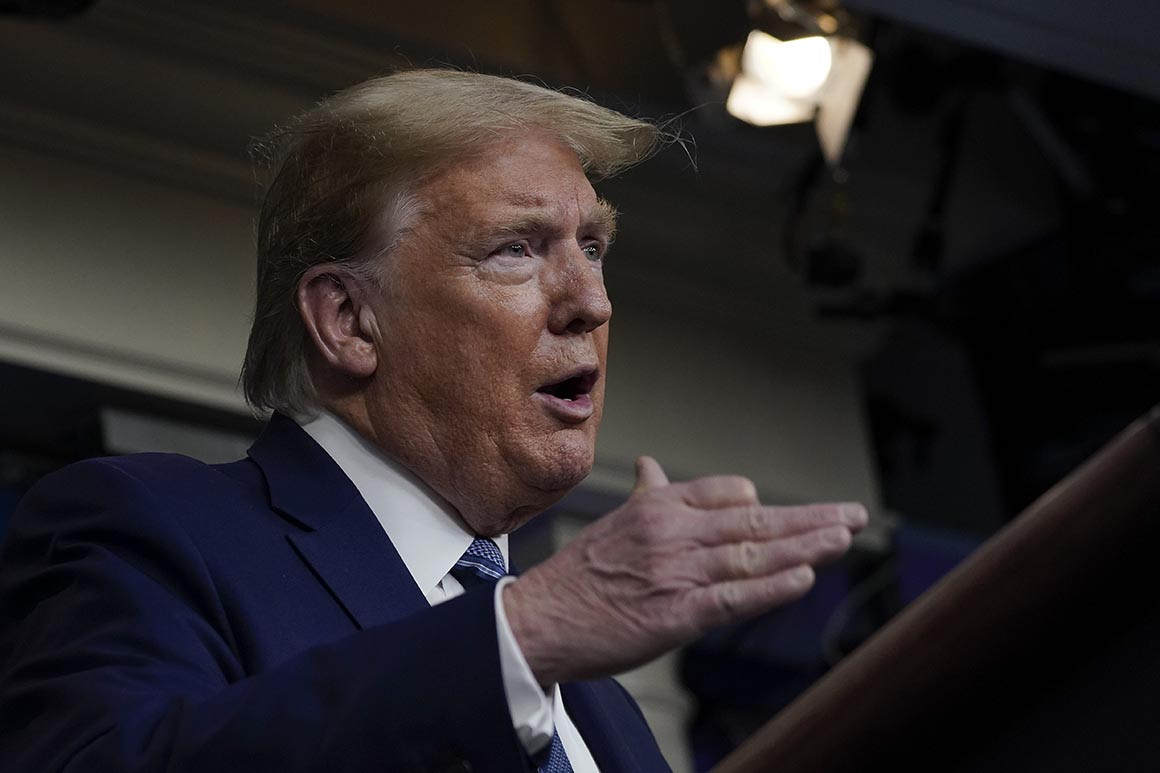 President Donald Trump has repeatedly touted a ban on travel from China as a key success in curbing the spread of coronavirus. | Drew Angerer/Getty Images
By ALEX ISENSTADT
04/24/2020 04:41 PM EDT
The National Republican Senatorial Committee has sent campaigns a detailed, 57-page memo authored by a top Republican strategist advising GOP candidates to address the coronavirus crisis by aggressively attacking China.
The memo includes advice on everything from how to tie Democratic candidates to the Chinese government to how to deal with accusations of racism. It stresses three main lines of assault: That China caused the virus “by covering it up,” that Democrats are “soft on China,” and that Republicans will “push for sanctions on China for its role in spreading this pandemic.”
Advertisement

“Coronavirus was a Chinese hit-and-run followed by a cover-up that cost thousands of lives,” the April 17 memo states.

The document urges candidates to stay relentlessly on message against the country when responding to any questions about the virus. When asked whether the spread of the coronavirus is Trump’s fault, candidates are advised to respond by pivoting to China.
“Don’t defend Trump, other than the China Travel Ban — attack China,” the memo states.
Republicans have indicated they plan to make China a centerpiece of the 2020 campaign. Trump’s reelection campaign recently released a web video painting Joe Biden as cozy with the authoritarian country. The pro-Trump super PAC America First Action has launched several TV commercials tying Biden to China.
Advisers to the president say polling shows China-focused attacks would be effective, and the reelection campaign has weighed a major TV ad campaign focused on the topic.
The NRSC memo shows that Republicans are also eager to make China an issue in down-ballot races. It was distributed by the Senate GOP campaign arm, though it was not explicitly drafted by or for the committee. It was authored by the political consulting firm of Brett O’Donnell, a veteran Republican strategist who has advised Secretary of State Mike Pompeo and Arkansas Sen. Tom Cotton.
Jesse Hunt, an NRSC spokesman, said: “We routinely send campaigns different documents and sources of information dozens of times per week. That’s the role of the party committee, especially in these volatile times.”
O’Donnell declined to comment.
The memo includes guidance on what Republican candidates can say when asked whether blaming China for the pandemic incites racism. Candidates are urged to respond by saying that, “No one is blaming Chinese Americans. This is the fault of the Chinese Communist Party for covering up the virus and lying about its danger. This caused the pandemic and they should be held accountable.”
“No one has suffered more from the murderous Communist Chinese Party dictatorship than the people of China,” the memo adds. “We stand with them against their corrupt government that caused this pandemic.”
The GOP’s planned China-focused assault, however, is complicated by Trump’s occasional praise for President Xi Jinping. The liberal organization American Bridge recently launched a commercial which plays a clip of the president praising Xi and declares that Trump “gave China his trust.”
百