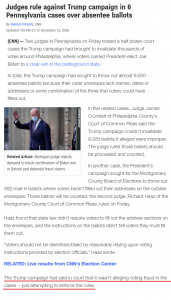 华尔街日报有类似的报道President Trump has claimed widespread fraud was at play in the presidential election. Several of his lawyers have told judges in courtrooms across the country that they don’t believe that to be true.
The Trump campaign or Republican allies have brought lawsuits in several battleground states contesting election results that favored President-elect Joe Biden, seeking to stop the certification of results or have ballots thrown out. Under questioning from judges handling the cases, at least two of Mr. Trump’s lawyers have backed away from suggestions that the election was stolen or fraudulent.