Florida’s $15 Minimum Wage Vote Might Be a Tipping Point

The Sunshine State is called a bellwether in the nationwide campaign to boost pay for hourly workers.
By
Olivia Rockeman
,
Claire Miller
, and
Michael Sasso
2020年11月17日 上午4:00 [EST] 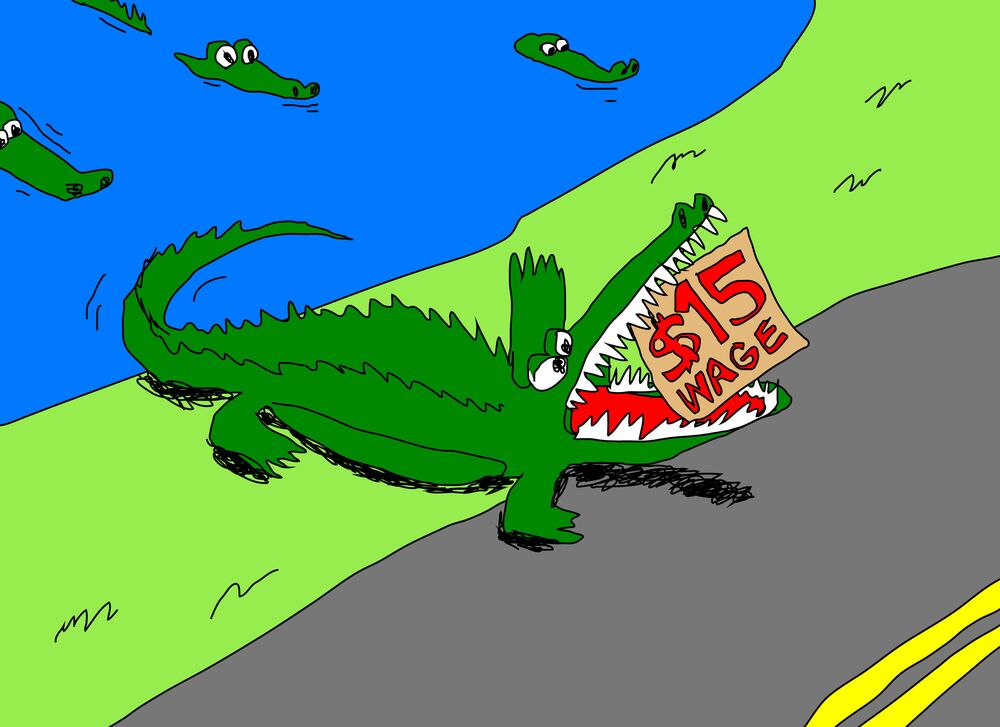 Pressure on Congress to boost the federal wage floor for the first time in 13 years is building after voters in Republican-leaning Florida approved a ballot initiative to raise the state’s minimum wage to $15 an hour by 2026.


Seven states already have passed laws that will eventually bring their minimum wage to $15, but they’re ones that typically back Democrats and progressive labor policies, including California and New York. That Floridians bypassed their Republican-controlled legislature to enact the new wage by constitutional amendment will be impossible to ignore, says Chris Melody Fields Figueredo, executive director of the progressive Ballot Initiative Strategy Center in Washington.


“If there is a state that would be kind of a bellwether, it would be Florida because it is the first Southern state,” says Saige Draeger, a research analyst at the National Conference of State Legislatures. “It would be the first major change in wages that we’ve seen in the South.”


As of Oct. 1, 2020
Data: U.S. Department of Labor
President-elect Joe Biden wants to more than double the federal minimum wage, currently set at $7.25 per hour, to $15, and he’s proposing an indexing system that will allow increases for lower-paid workers to keep up with those for middle-income earners.


Carrying out the plan will be easier if Democrats win both Senate seats up for election in Georgia on Jan. 5, which would give each party 50 seats in the chamber and allow Vice President-elect Kamala Harris to break a tie vote. The GOP has tended to block wage increases at the federal and state levels.
“Everyone who follows this recognizes that the main obstacle to raising minimum wages is Republican legislatures,” says Ben Zipperer, an economist at the Economic Policy Institute, who has testified in Congress in support of lifting the federal minimum to $15. 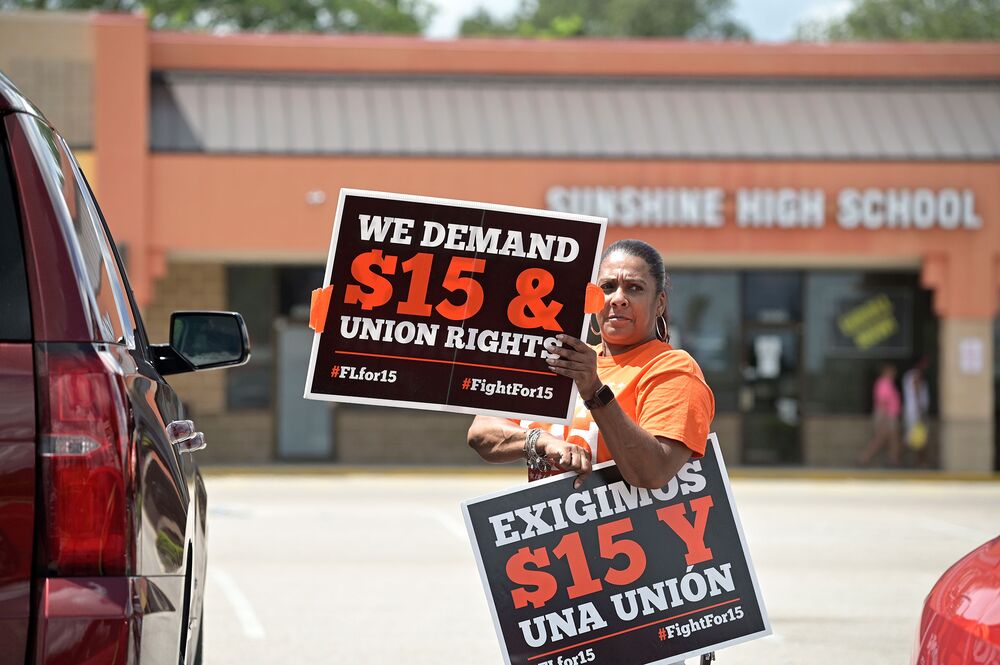 A demonstrator hands out signs calling for a $15 minimum wage at a Strike for Black Lives event in Orlando on July 20.
PHOTOGRAPHER: PHELAN M. EBENHACK/AP PHOTO
In Florida, 51.2% of the electorate voted for Trump and 61% approved raising the state’s $8.56 an hour minimum wage in increments, until it hits $15 in 2026. It “just goes to show that minimum wages are something that even the most conservative and most liberal voters in the country value,” Zipperer says.
Emmanuel Hunt earned $5.54 an hour, not including tips, as a wheelchair attendant at Orlando International Airport before being laid off during the pandemic. He says his take-home pay was so low he couldn’t afford to bring his children from St. Lucia to live with him in the U.S.
Elated as he is by the idea of making $15 an hour, he worries that the Florida Legislature will try to pass a bill to weaken the constitutional amendment before it takes effect. “This $15 amendment was not about party, it was about workers,” says Hunt, who has worked to organize his workplace on behalf of the Service Employees International Union. The union has been a driving force in the state-to-state battle for a $15-hour minimum.
Supporters and critics of minimum wage laws cite dueling studies to show how the measures boost people out of poverty—or lead businesses to cut jobs or employee hours.
Bolstering the argument for a wage floor, three researchers at the Federal Reserve Bank of New York studied retail and hospitality employment in counties along the New York-Pennsylvania border after New York hiked its minimum wage in 2013. Since Pennsylvania hadn’t raised its own minimum, the experiment offered a chance to see whether the New York counties would lose jobs.
In fact, as New York’s minimum wage climbed to above $10 an hour, leisure and hospitality employment rose in those counties when compared with ones Pennsylvania. Meantime, employee earnings rose significantly more on the New York side, the researchers found. At retail businesses, employment dropped on both sides of the border at roughly the same rate, reflecting an industry decline, but New York workers still saw stronger earnings growth.
A 2019 analysis by the nonpartisan Congressional Budget Office found that increasing the minimum wage to $15 by 2025 would boost the income of 17 million Americans, but would also cause 1.3 million to lose their jobs. Losses would fall disproportionately on part-time workers and adults without a high school diploma, according to the study.
“The fact that 6.4 million Floridians voted to increase the minimum wage last week … it shows the power of worker voices”
Organizations that represent industries with a high proportion of hourly workers warn against increasing costs for companies during a pandemic that has millions of small businesses clinging to life. “With many businesses struggling to keep their doors open, now is not the time to place additional burdens on employers and stifle the job creation our economy desperately needs to recover from the pandemic,” says David French, the National Retail Federation’s senior vice president of government relations.
Several large corporations have increased hourly wages on their own accord in recent months. In July, Target raised its starting wage to $15 an hour. And in September, Walmart Inc. hiked wages for 165,000 hourly associates nationwide.
Labor groups pushing for a higher minimum wage are drawing inspiration from the Florida vote. It “absolutely does create more momentum and pressure,” says Allynn Umel, national organizing director for the union-funded Fight for $15 campaign. “The fact that 6.4 million Floridians voted to increase the minimum wage last week, including millions from both parties—it shows the power of worker voices.”