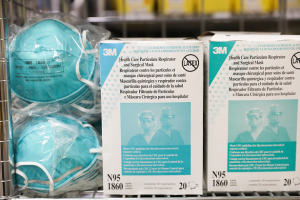 Medicom, a Canadian company that is one of the world’s leading manufacturers of N-95 and other medical face masks.

Medicom has factories all over the world, including in China, which has barred the company from taking its masks out of the country, Mr. Reuben said. Mr. Reuben said there is no way to get those N-95 masks to the United States.

In its factory in Charlotte, N.C., Strong Manufacturers has three L-shaped machines that are set up to churn out about 70 masks a minute, or roughly 9 million a month.

But the company sourced the raw materials for the masks from a supplier in Wuhan, China, where the coronavirus outbreak started. Now, the goods aren’t coming.

“Our materials were ready to ship from Wuhan, and they got hung up on the dock as soon as this started,” said Alan Bagliore, the chief executive of Strong Manufacturers. He said orders from other suppliers aren’t expected to arrive for up to four weeks.

At a news conference on Saturday, Gov. Andrew Cuomo of New York said the state was purchasing 2 million N-95 masks from American and foreign companies. He said the state was paying a rich price for the coveted masks: $4 apiece for products that normally go for 80 cents.

Matt Hall, a spokesman for Hanes, said Trump administration officials called the company about a week ago to see if Hanes could start making face masks. Hanes and a group of other yarn and clothing companies agreed to make up to 6 million masks a week, he said. But Hanes is not making the most-sought-after N-95 masks. “They are masks that would be helpful to prevent somebody from sneezing and coughing from spreading any kind of germs that they might have,” Mr. Hall said, adding that the Food and Drug Administration approved a prototype that can be used if N-95s were not available.

Lauren Streicher, a surgeon in Chicago, has started using her home sewing machine to make cloth masks out of elastic bands, wire and material donated by a local fabric store. She said she could produce one every five minutes. On Saturday, she posted an instructional video on YouTube so others could do the same. “They don’t have to be perfect,” she said. “This is about making something practical, quick and functional. Oh, and they’re washable.”

In Los Angeles, Dov Charney, the founder of Los Angeles Apparel and former chief executive of American Apparel, in recent weeks devoted the majority of his 150,000-square-foot factory to manufacturing surgical masks and hospital gowns. The company started selling and shipping masks in mid-March; it is ultimately hoping to produce 300,000 masks and 50,000 gowns a week.

In New York, the designer Christian Siriano has told his 10 seamstresses to begin making masks with the goal of producing a few thousand a week.

And in Virginia, the swimwear company Karla Colletto plans on reopening its factory in the coming days to help combat the shortage of face masks.

Jean Liu, the chief executive of Litex Industries, an outdoor furniture manufacturer in Texas, said that a relative who worked at Massachusetts General Hospital in Boston described dousing her N-95 mask with alcohol each day to prolong its life. “I thought, ‘I own a factory I ought to be able to do something,’” Ms. Liu said.

In recent days, one of the company’s plants in Michigan has begun using its fabric-cutting equipment to churn out surgical masks with material donated by textile companies in the Carolinas. The goal is to be able to quickly make 1,000 a day.

7）苹果公司的老总，计划捐赠几百万口罩。
And Tim Cook, the chief executive of Apple, said on Saturday that the company planned to donate millions of face masks in the United States and Europe. 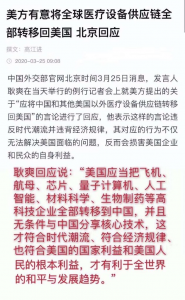