California Plans to Ban Sales of New Gas-Powered Cars in 15 Years
The proposal would speed up the state’s efforts to fight global warming at a time when California is being battered by wildfires, heat waves and other consequences of climate change. 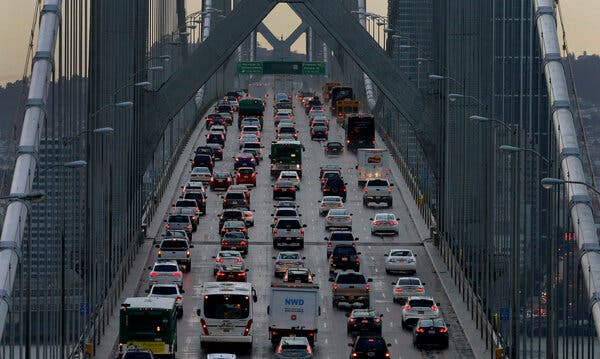 By Brad Plumer and Jill Cowan
California plans to ban the sale of new gasoline-powered cars statewide by 2035, Gov. Gavin Newsom said Wednesday, in a sweeping move aimed at accelerating the state’s efforts to combat global warming amid a deadly and record-breaking wildfire season.
In an executive order, Governor Newsom directed California’s regulators to develop a plan that would require automakers to sell steadily more zero-emissions passenger vehicles in the state, such as battery-powered or hydrogen-powered cars and pickup trucks, until they make up 100 percent of new auto sales in just 15 years.
The plan would also set a goal for all heavy-duty trucks on the road in California to be zero emissions by 2045 where possible. And the order directs the state’s transportation agencies to look for near-term actions to reduce Californian’s reliance on driving by, for example, expanding access to mass transit and biking.
“This is the next big global industry,” Governor Newsom said at a news conference on Wednesday, referring to clean-energy technologies such as electric vehicles. “And California wants to dominate it.”