According to the Post's reporting and Bobulinski, the proposed equity split referenced "20" for "H" and "10 held by H for the big guy?" with no further details.

"In that email, there is no question that 'H' stands for Hunter, 'big guy' for his father, Joe Biden, and Jim for Jim Biden," Bobulinski claimed Thursday in a statement he gave ahead of the second presidential debate, where he was President Trump's guest.

"In fact, Hunter often referred to his father as the big guy or 'my chairman.' On numerous occasions, it was made clear to me that Joe Biden's involvement was not to be mentioned in writing but only face-to-face. In fact, I was advised by [James] Gillier and [Rob] Walker that Hunter and Jim Biden were paranoid about keeping Joe Biden's involvement secret."

According to separate emails obtained and analyzed by Fox News, the "chairman" appears to refer to China.
最后编辑: 2020-10-23 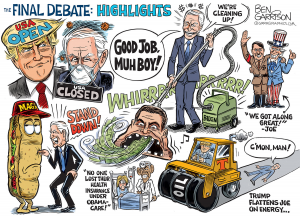